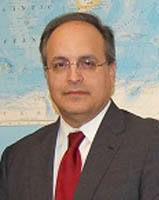 Dr. Frank O. Mora, a 1981 Close Up alum, currently serves as Deputy Assistant Secretary of Defense for Western Hemisphere Affairs. In that position, he oversees policy issues and defense relations involving countries in the hemisphere as well as US government funding of hemispheric defense cooperation. Dr. Mora’s fascinating career has included teaching, advising, speaking, and writing about strategy, global security, and Latin American politics, for such organizations as the CIA.

Dr. Mora, a graduate of Miami’s Belen Jesuit Preparatory Academy, had not traveled much before coming to Washington, DC, with the Close Up program. Visiting the Capitol for the first time was an experience he remembers vividly to this day. Mora came on Close Up during the early days of the Reagan presidency when the recession was a central topic of conversation. Dr. Mora also fondly recalls meeting his Congressman, Rep. Dante B. Fascell (1955-1992), who piqued his lifelong interest in Latin American politics.

Despite the cold Washington temperatures during his program week, Mora’s Close Up experience encouraged him to attend college in Washington, DC, where he graduated from George Washington University in 1986. He was also inspired to pursue a career in public policy. The Florida native returned again to Washington, DC, to live and work after graduate school in Miami.

Today, Dr. Mora says he would encourage any young person to attend a Close Up program. The workshop groups allow for a deeper exploration of the issues and being in Washington among policymakers, elected officials, and other powerful people helps expose students to exciting education and career options.