While on Close Up, David Roghair learned how accessible the government is to its citizens. Now, as a magistrate judge, Roghair makes his courtroom accessible to his community.

For Hon. David Roghair, the Close Up journey from Alaska’s northernmost coast to Washington, D.C., was long, but it was worth it. With his classmates from Barrow High School, Roghair visited Capitol Hill, where he saw the National Statuary Hall Collection, used the whispering spot in the rotunda, and met with his Senators and Representative. He was in awe, standing in places where so many debates and decisions had occurred. During the trip, Roghair specifically remembers sitting in a D.C. courtroom, watching the legal process firsthand in the form of a felony trial. He had always been passionate about history and civics, and so he was curious about seeing the legal system in action. During Close Up discussions, Roghair got involved, participated in lively question and answer sessions with speakers, and learned more about the importance of taking your civic duty seriously. 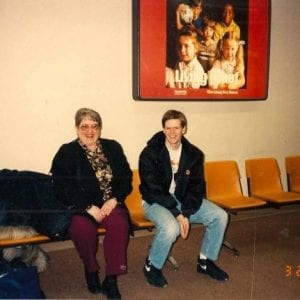 In addition to Close Up, Roghair also spent a semester studying abroad in Siberia, Russia. His experience overseas, and his fascination with the culture led him to major in Russian as an undergrad at Stanford University, and Roghair later worked in the Overseas Studies Program at Stanford to help other students engage with other cultures and experiences. He went on to receive a Master’s in Russian Studies from the University of Kansas and his Juris Doctor from Lewis and Clark Law School. To this day, Roghair is eager to meet someone who speaks Russian so that he can shake the rust off of his language skills. For him, embracing other cultures was not only fascinating, it’s also the first step toward mutual understanding. With understanding comes the ability to reach a compromise and accomplish change.

Roghair took this concept to heart when choosing a career in the law. What did his interest in Russian culture, history, foreign relations, and civics all have in common? Conflict resolution. Being a diplomat and peacemaker by nature, Roghair had a knack for facilitating difficult conversations, educating others, and solving problems. Roghair’s love of the law quickly expanded because there was always more to learn and always more material to study. Although he spent time in other parts of the world and other parts of the country, Roghair was drawn back to Alaska. He always felt a pull to help his community and his home.

As an attorney, Roghair spent a few years in general practice in rural Alaska, where “you were never sure what case would come through the door”, and logistics were their own hassle. Having a small staff, Roghair saw it as a growth opportunity, learning how to be independent and how to deal with the unpredictable. He learned how to do a variety of tasks, and overcame the logistics of simple things like ensuring paperwork was delivered on deadline during a snowstorm, and communicating with clients, courts, and other attorneys despite frequent dropped calls and Internet outages. He learned that no matter who came to court or why, everyone had a unique story and understanding of the law. It reminded him that in the same way that Congress should make itself accessible to its constituents, a courtroom should be accessible to its community.

Every day, Roghair uses his time on the bench to help people understand and relate to the experience of being in court. He realizes that whether someone is in court for a traffic ticket or a felony charge, a courtroom can be intimidating. As a result, he returns to peacekeeping by projecting an attitude of understanding and respect. By using plain English rather than legal terms, taking time to explain the process, and clarifying his decisions, Roghair has made transparency a cornerstone of his service. He has also tried to be a reassuring and calming presence in his courtroom, reducing the stress associated with an encounter with the justice system.

Outside the courtroom, Roghair takes time to visit schools, helping students engage with hypothetical cases, starting discussions, and ultimately helping them learn about the legal system. The Close Up spirit of giving back to his community and maintaining an educational influence left a lasting impact on Roghair. He feels that part of his job is educating people on the justice system, and reinforcing the role of the court and the government. Through his volunteer work with local schools, the Jessup International Law Moot Court, his church, and the same Rotary Club that supported his Russian language study, he continues to make his community a vibrant place to live, while ensuring that students are healthy and engaged.

What does citizenship mean to you?

It means feeling like you’re part of a community, whether your community is your block, town, or state, you’re part of a greater whole, and you are invested in what it’s like to live there. You should want to give back, and make your community a better place. It also means taking your civic responsibility seriously, which includes jury duty! It’s a guaranteed right in the Constitution, and it’s a process that was critical in the founding of this country. It’s easy to be distracted by how busy you are and put off participation, but it’s really essential to the role of the justice system.

What advice do you have for students interested in the law?

If you have a passion, it’s possible to make it happen. The legal profession is always changing, and technology has downsized the field, but we still need future lawyers, and there are plenty of opportunities to get creative with your practice. In undergrad, choose whatever you want to study that will help you learn how to write well. In law school, don’t choose your classes based on what will be on the bar exam; you can take other prep classes for that. Once you graduate, you’ll only need one job at a time, so don’t focus on how many jobs there used to be, just focus on the ones that you’re interested in.